Dewig Meats has been in operation since 1916, but it took a pandemic for some consumers to discover its award-winning meats.

During the thick of the turmoil that surrounded the 2020 COVID-19 pandemic, consumers in southern Indiana couldn’t find basic necessities like ground beef in their grocery stores. When those meat cases
were emptied, they turned to their local meat market, Dewig Meats, which offered a steady supply of ground beef, steaks, chops, bacon and more. During that time, some shoppers would go up to Darla Kiesel, one of the family operators, and say, “Where have you guys been?” 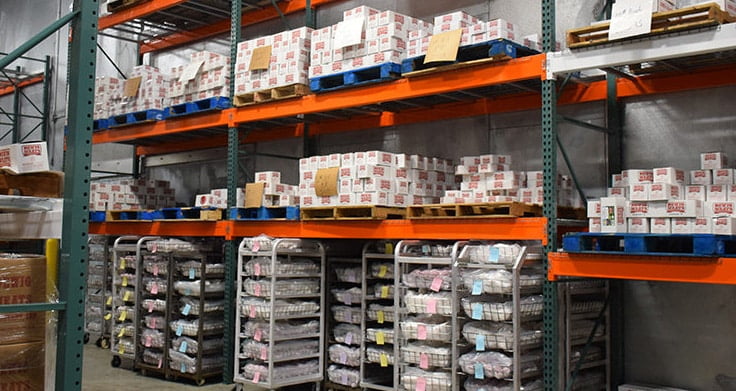 Well, Dewig Meats has been located in the same place in Haubstadt, IN, for more than 100 years. It’s catered to local livestock producers as the best place to process their beef and pork. Generations of Hoosiers have shopped there for their fresh meat and award-winning cured items. And when the conventional food supply chain was disrupted, the company cranked up its production capabilities and continued to serve its livestock producers and retail customers alike.

“They realized what this little plant can do, and the products that we have,” Darla said of the growing customer base. “Our selection was astronomical compared to the grocery stores. They were wiped out, but we had tons of things.”

While no company could have prepared for a pandemic, Dewig Meats was well suited to meet the extra demand. The facility, which has undergone dozens of expansions, contains a massive freezer that contained hundreds of
full pallets of products. The company ran through that inventory in about three weeks, but it helped to stave off the initial onslaught until the panic died down.

“We never ran out of everything,” adds Dean Dewig, Darla’s older brother. “We might have had an individual cut that we might be out of, but you were going to have something to eat. If you came in and you wanted ribeye steaks that day, maybe you had to eat strips. If you wanted ground beef, maybe you had to eat sausage patties that night rather than hamburger patties.”

Those initial few weeks were chaotic, as the retail area was so crowded that you couldn’t walk from one end of the store to the other. The local police department stationed an officer to direct traffic in the parking lot. Dewig Meats had to enforce limits on the amount of ground beef
an individual could buy at once. Darla says that when she would bring out a cart with freshly packaged chubs of ground beef, the meat never made it to the coolers. Customers picked the cart clean as soon as it was rolled out to the store.

“It was pretty simple to rotate stock – you just brought it out! There was no rotating,” jokes Austin Dewig, part of the fourth generation. He adds that the company also chose to limit its selections to the most-requested items and temporarily discontinued some of the more labor-intensive products. “We have a lot of variety now, but during that time, instead of having six types of beef patties we might only have had two different sizes.”

Once capacity limits were put in place, shoppers waited in lines that spilled out into the parking lot. Through it all, Darla posted daily videos on the Dewig Meats Facebook page to reassure customers that there was a plentiful supply.

The hard work that the Dewig Meats family and employees went through did not go unnoticed, and Darla notes that the crowds, in spite of the lines, were mostly civil and cordial. Once, when she went outside to thank the people waiting in line for their patience, she was greeted with a round of applause from shoppers who appreciated the efforts of the team.

And those customers who just discovered Dewig Meats? One year later, many of them have stayed. The company’s retail sales are still strong, and its wholesale sales are rebounding as restaurants start to reopen.

A long history and a good reputation 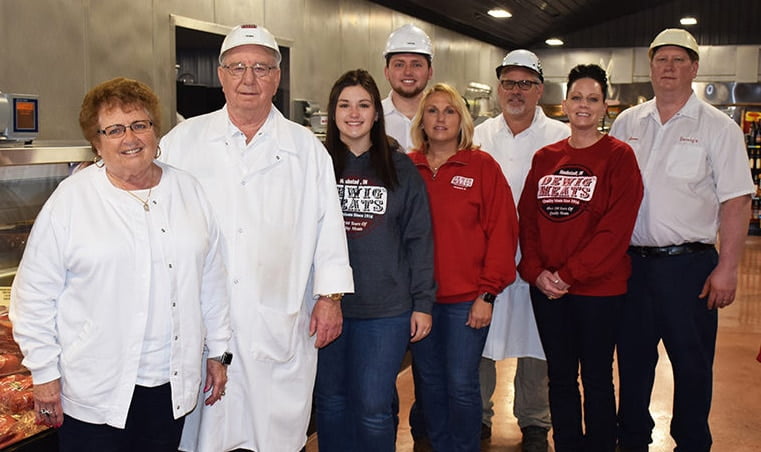 Dewig Meats got its start in 1916 when three brothers (Anton, Joe and John) began working together. There are a total of eight family members currently involved with the day-to-day operations. Tom Dewig, John’s son, represents the second generation with his wife, Janet. Their two children and their spouses are Dean and Karen Dewig and Darla and Aaron Kiesel. Dean and Karen’s son Austin and daughter Jade are the latest family members in the business, with more from the fourth generation coming of age within the next few years.

Along with the family members, Dewig Meats employs between 80 and 90 full-time and part-time employees. During the height of the COVID pandemic, employees were given bonuses for working full-time. Austin noted that the company brought in a few more processing tables to create extra social distancing, and they were able to avoid the large-scale breakouts that afflicted many larger processors. While many small meat companies have phased out their slaughter operations, Dewig’s has maintained that aspect of the business and tried to grow it when possible. Dean says that the family had considered dropping slaughter in the past, but they didn’t want to lose control of the quality of the raw materials.

“All your meat is dependent on what you buy in,” he says of those companies that drop slaughter. “And you can’t buy the same quality as what we’re producing.”

The company’s versatility became a real asset last year. Since Dewig Meats has a steady supply of producer clientele, it was in no danger of running out of raw materials. In fact, Dewig Meats expanded its slaughter to 45 to 50 head of cattle a week, and 150 or as many hogs that could be stored safely in the coolers.

“Whenever we needed meat to grind for ground beef, we called and got more cattle in,” Darla says. “There’s a pretty good supply chain whenever you can start with live animals and slaughter them. These plants that don’t have kill floors didn’t have that option; they had to buy boxed meat. We could bring live animals in and produce products.”

The company did have to supplement its meat supply with some outside product. Even then, there were no concerns about shortages.

“We had companies that were putting our name on pallets of meat before they even called Dean to see if he wanted to buy them,” she adds, “because we pay our bills, we don’t cause any problems, and we’re just a good account for them. So we really have to pat our suppliers on the back for helping us out.”

Similar to Dewig Meats’ retail shoppers, many area farmers utilized Dewig Meats’ slaughter operations for the first time during the pandemic. Many have stayed loyal customers and have booked their services through the end of 2021.

“Dean told our mom the other day that if she books any more cattle, the hogs are going to have to hang outside because there’s no room in the cooler anymore!” Darla jokes.

Looking to the future

Dean Dewig relates one of his father’s sayings. “You can tell how successful a business is by counting the rooflines.” If that’s the case, Dewig Meats has been really successful, as multiple expansion projects over the course of its history have resulted in many different rooflines. The business started as Dewig Brothers Packing, with no retail sales. Fast forward to today, and there is a massive shopping area that shows off the company’s full range of fresh cuts, frozen products and cured specialties. Its barbecue products are extremely popular, as are its Bierstube bratwursts, German bologna and snack sticks. There are also a variety of Indiana-made products and a fine selection of wines and beer. The processing area has grown as well, and the company’s growth over the last year has highlighted the need for future projects, such as building a new, larger kill floor and expanding the processing area and sausage kitchen. 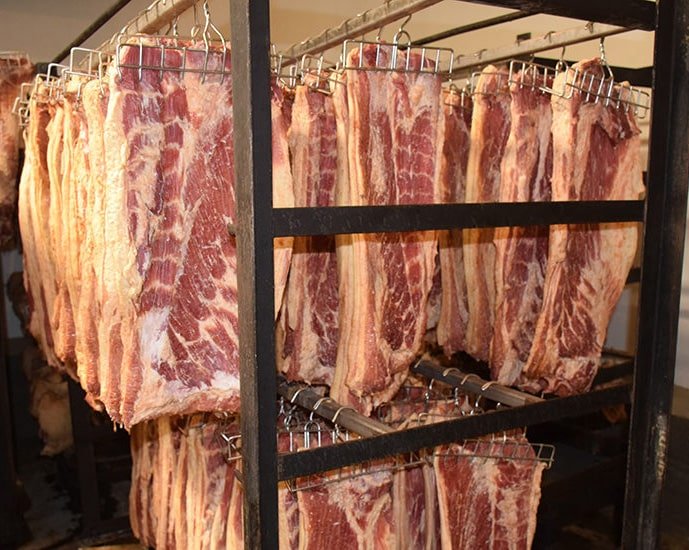 “If you asked for $150,000, you had to show that you would also invest $150,000. In my opinion, that’s a pretty good grant, because it shows that you’re trying to better yourself,” Darla says. As the executive secretary and treasurer of the Indiana Meat Packers & Processors Association, she has been working with the state’s Agriculture Department and going on tours with state officials to show the importance of making more funds available.

“The problem with the meat packing industry is that everything is so expensive,” she says. “You can’t buy a piece of machinery for a couple thousand dollars. For our needs a packaging machine costs $130,000. A patty machine costs $125,000.”

“Meat packing plants also have a hard time with loans. We’re a different industry, plants of our size and smaller, there’s just not that many of us. When we go to the banks, typically they have not worked with any other meat packers, so they’re a little reluctant to lend money,” she adds. “These grants were really beneficial for a lot of plants to finally get some equipment that they needed, but maybe they couldn’t justify it without getting some help.”

June 15, 2021
Article by Sam Gazdziak
with The National Provisioner