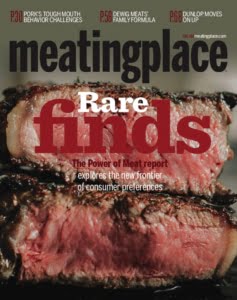 Dewig Meats brings a history of innovation and ambition to its multi-generation family operation.

“This was pretty funny.”

That’s how Janet Dewig, co-owner of Dewig Meats in Haubstadt, Ind., begins her story about the time she and husband/co-owner Tom Dewig visited an IBM sales office to purchase a computer.

It was 1985, and business at the family-owned meat processor was booming — so much so, in fact, that Janet was having trouble keeping track of client order histories. Desiring a more elegant, foolproof system, Janet and Tom visited the IBM office in nearby Evansville, Ind., to assess their options. The reception, Janet recalls, was not exactly warm.

“These guys all had their white shirts and ties, and I’ll never forget the cufflinks,” Janet explains. “When we went in and told them we were interested in [a computer], they looked at us, laughed, and said, ‘Why would anyone in the meat business need a computer?’”

That computer — a pre-Windows machine that ran the MS-DOS operating system — cost the Dewigs $35,000, and then another $37,000 for the programming fee. But for Janet, it was a worthwhile investment. Not only did the IBM seamlessly handle Dewig Meats’ expanding business, it also required zero debugging or maintenance calls until the business upgraded to Windows machines in the late ‘90s.

“We were afraid that some of our older customers wouldn’t appreciate having to deal with this computer, because they’d never seen one before,” Janet says. “They loved it! Because we had a way of going back and looking [at older orders].”

Beyond the culture-clash humor of Janet’s tale, however, is a telling demonstration of why Dewig Meats has been a mid-South meat processing institution …