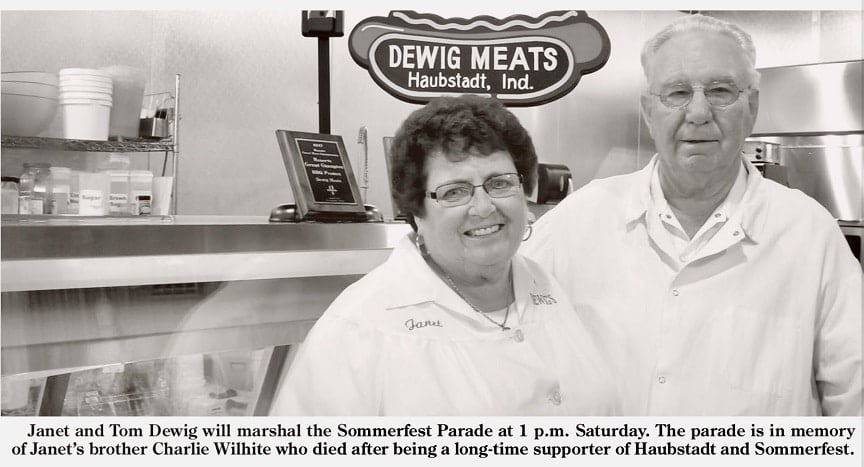 “This one’s for you, Charlie!” is the theme selected to honor recently-passed community patriarch Charlie Wilhite, and in his honor Tom and Janet (Wilhite) Dewig were selected to marshal the Sommerfest parade at 1 p.m. Saturday in Haubstadt. Janet is Charlie’s sister.

“This honor is real special not only because of my brother’s memory, but he and Sandy were honored just last year with Grand Marshal, and I feel real special to be a part of that club,” she said. Gary Steckler, Parade Chairman, talked about how the couple are staples of the local community. “Tom and Janet Dewig are selected as Grand Marshals this year to help us celebrate things that we love about our communities, too! The Dewigs are supportive of the area schools and their church, and they seem to walk the talk when it comes to charity,” he said. Evan Hipp, Haubstadt dentist, agreed. “They are grounded in community, family, and faith. You only have to walk into their store to know they are committed to quality, too,” he said.

Tom and Janet were in the same grade and school together through 12 years in Haubstadt. Then Tom went to University of Evansville while Janet went to Lockyear Business College in downtown Evansville. They didn’t date in school, but they found each other interesting in college, then married in 1967. They were growing the family, with two young boys, Darell and Dean, when Tom went to National Guard in 1970. Janet ran the meat packing plant with Tom’s brother, Bill Dewig, during that time to keep it going. They later had a third child, Darla.

Tom and his brother, Bill, bought the business from their uncles and built it into the business locals know today, including building the original meat counter in 1967. “For many years, the most popular packaging through the early 1970’s was a No. 10 wash tub. The typical customer would ask us to butcher and cut up cows and hogs. Then the customer would take the meat home in big tubs to wrap and freeze it themselves. Later we introduced wax paper, and we processed the meat much like we do now,” Tom said.

Tom and Janet talk about the long hours needed to keep the business going, and in doing so, reveal a positive attitude recognized by the community they serve. “We put in long hours here, but I’ve got a job I like. It isn’t really work when you love what you do,” Tom said. He advises young people working for him to find a job they enjoy. “That way you will love what you do, and you will do it well,” he said.

They happily welcome many of their family into the business, including their children, Dean and Darla, both of their in-laws, Karen and Aaron, and two grandchildren, Austin and Jade. “We are close to our family,” Janet said. “We don’t always get together with family on weekends, but we see each other all week!” When asked about the legacy they want to leave, they say the meat business sums up what they see as important in life. They believe in hard work, maintaining high standards, family, and living in faith they said. “The church is part of our community. It is important.” Janet said, “You can’t just live your faith on Sunday morning. It’s an everyday thing.” “It shows in how they treat employees and customers,” said Greg Harpenau, Haubstadt Sommerfest member. “They are flexible as they can be with employees, based on several stories I’ve heard. They support the Sommerfest in a big way, and don’t forget the famous bratwurst that is a cornerstone Sommerfest treat!”

After 50 years of marriage, Janet and Tom are always seen together. “We had worked together 50 years, and lived as married couple for those 50 years. So naturally, we were really celebrating 100 years together,” she said of their recent anniversary. “This community has been good to us, and we want to be good for it as well,” Tom said. “Many people think of Dewig Meat when they think Haubstadt, and we are proud of that association. It is a compliment to us all. We know they love their community, and we are ready to embrace them as well,” Harpenau said.