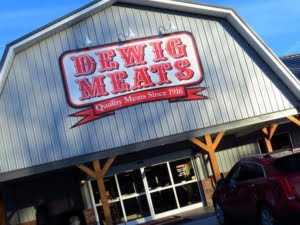 Southern Indiana is rich in German ancestry and Darla Kiesel of Dewig Meats in Haubstadt says one way they carry on the traditions of their forefathers is with their prize winning meats.

The infamous Dewig braunschweiger has been garnering attention from local “foodies” and national judges alike.

Dewig’s has been competing around the nation and internationally for years, entering braunschweiger in meat and sausage competitions including the Indiana Meat Packers and Processors Association, Wurstfest in Hermann, Missouri and the American Association of Meat Processors and the world famous IFFA trade fair.

As they approach their 100th anniversary, Kiesel says they will receive results from their most recent competition soon.

“Any placement is considered extremely prestigious, however, we are always going for gold,” she said.

“If we were to win any medals, it’s considered the best in the world — not just best in the nation,” she said.

“We are really excited about that.”

Kiesel says when it comes to judging the meat, experts will look for things like external appearance, flavor, aroma and palatability.

“Braunschweiger is a little bit of a different creature because it doesn’t taste like a ham or have the texture of a ham or a loaf,” she said.

“You can get downgraded if it’s too creamy or more like a spread— it’s all about the right balance.”

If you’ve ever wondered exactly how the sausage gets made, Dewig sausage maker Aaron Kiesel says it’s a simple combination of local quality product and family recipe.

He says they still use a good old fashioned cooking method called “water cooking” in a giant kettle.

“About 50 percent of the product is liver because it is a liver sausage,” he said. “We actually use pork liver.”

“We also like to put bacon in ours, which adds flavor along with the seasoning which includes onions and mustard.”

Darla Kiesel is confident that their bacon is the best bacon in the nation as well.

“In my opinion, our braunschweiger is so good is because it has bacon in it,” she said.

“When you have a good bacon to start with, it makes your braunschweiger better.”

In addition to the braunschweiger, they also have a fresh line of local beef and pork, hams, sausages, German bologna, hot dogs, bratwurst, snack sticks, turkey, cheeses, beer and wine among others.

“We process the majority of the meat ourselves,” she said.

“The live animals come in here, we butcher them and then we cut them ourselves, which is exciting because they (the federal government) recently got rid of the required ‘country of origin labeling’ which indicated where the meat was processed,” she said.

“Soon, when you go the grocery stores, you really won’t know where your meat is coming from — and in my opinion, that is a shame,” she said.

Kiesel said they will continue the labeling system at their store, and believes “keeping it local” is key.

“Here, all we sell is product from the USA.”

Braunschweiger’s popularity has caught on outside of Gibson County as well.

Kiesel said patrons can buy their products from several Evansville grocery stores, including Schnucks and Wesselman’s.

“The local Holiday Foods here in Haubstadt is a great distributor of all of our products, so you can buy it there as well.”

(Story originally appeared on pdclarion.com at this link)