Dewig Meats will mark 100 years of providing quality meats with a celebration this coming Saturday, June 25, and inviting all to join in the festivities. There will be inflatables, games and ice cream for the kids and a huge sale sure to attract patrons from near and far. 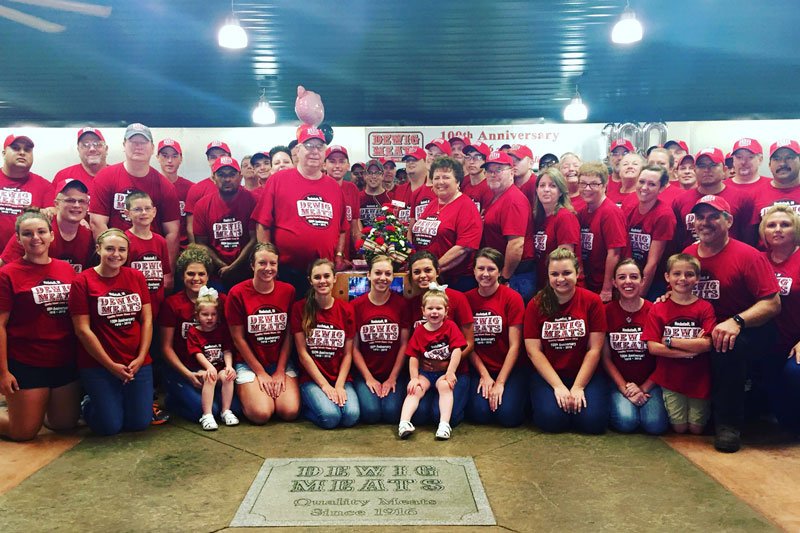 Dewigs opened for business in 1916, when Anton Dewig started the meat processing business that has now grown into Dewig Bros. Packing Co. Inc.

His brothers, Joe and John, joined the shop a few years later. Together, the Dewig brothers drove the family business to become one of the most successful meat packing facilities in Indiana.

The Dewig brothers had the meat processing knack in their heritage. Their father was a road butcher who went from farm to farm as an onsite butcher during the early 1900’s.

In 1962, John Dewig’s sons Tom and Bill bought the business from their uncles and the operation continued to expand. Bill retired in 1990 and Tom took the helm operating the business with his wife Janet, who started working in 1967, the year they married.

Tom and Janet continue to work in the shop, along with their entire family. The family tree is extensive at Dewig Meat. Both of Tom & Janet’s children, Dean & Darla are very active in the business. Dean works with his wife Karen and children Darell Austin, Sarah Jade & Jesse Logan. Dean can be found running the day to day operations while Karen oversees the office. Darla works with her husband Aaron and children Jarrett, Addison & Heidi. Darla is a fixture of the new retail meat market while Aaron manages the Sausage Kitchen and is responsible for all the award winning products.

“One of the biggest reasons that we are so successful is that we process most of our meat in house.” Darla said. “We only offer USA beef and pork, much of it comes from local family farms. We do sell more then we can butcher, so we have to buy–but we buy only US products, and our customers appreciate that.

Darla added that people want to know where their food is coming from and that it has not been treated with unnecessary enhancers.
“We pride ourselves in offering the best pork and beef products for our customers. Some of the discount stores offer sub-par products that have been pumped with enhancers to make the meat stay pretty in appearance for long periods of time. Some of these meats come from Argentina, China and Mexico and are poor quality.”

She added that the government is no longer requiring the country of origin label on meat, so people won’t know where their meat originated.

“Here, our customers will always know that they getting the highest quality meat, grown in the USA. We only sell ‘Choice’ which has a higher fat content, and ‘Select’ which is a leaner grade. In the meat business, fat equals flavor.”

“We have customers who travel a good distance to buy our meat and we are noticing an increase. They bring their coolers to get their meat home safely,” Janet said.
Darla sees the trend leaning toward more frozen products in the future as their customer base expands in territory.

Dewigs employs 70 people, including lots of cousins. Many college & high-schoolers hold summer jobs there as well.

Catering has become a good fit for shop. Brent Weatherwax is in charge of the catering and has grown that side of the business in the past three years. That includes catering to St. Mary’s and their staff of 2,300 for the past few years.

Dewig Meats received several awards at the DFV/AAMP Quality Competition for Sausage and Ham. The American Association of Meat Processors (AAMP), in partnership with the German Butchers’ Association (GBA), held the contest at the University of Wisconsin-Madison on Jan. 11-15, 2016. This competition was held in conjunction with the 2016 IFFA Show in Frankfurt, Germany. The judges came from Germany and Dewigs received so many awards that they were invited to Germany to be presented with their awards and with The Cup of Honor for receiving five or more gold medals.

“We give the customers what they want,” Janet Dewig added. This is our guiding principle and the basis for our company values.”
While many things have changed over 100 years, Dewig Meats continues to offer the finest quality meat just as they have for the last century.