EVANSVILLE, Ind. – Brent Weatherwax recently got to sleep in… until 3 a.m.
On many days, he’s up at 2 a.m. He gets his Pappa Bear’s Catering food truck and smoker out of storage downtown, drives it up to Dewig Meats in Haubstadt, gets the meat going low and slow on the smoker, then heads to set up at his chosen lunch location or catering job for the day. 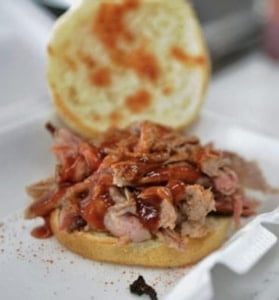 Pappa Bear’s is known to many as the catering arm of Dewig Meats, but Weatherwax is the owner and operator, although his relationship with Dewig’s is a close one.
“When I’m not on the truck, I’m a butcher at Dewig’s,” Weatherwax said. “The meat comes from Dewig’s. The facility is my commissary, and they helped me get to this point. I couldn’t have done it without them.”
Weatherwax is from Evansville. He attended Southern Illinois University in Carbondale, where he worked with the famous pitmaster Mike Mills at the 17th Street Barbecue in Marion.

“Mike is a legend,” Weatherwax said. “He was a three-time world champion at Memphis in May. He took me to barbecue conventions — we went to New York, South Carolina, San Diego…”
At 17th Street, Weatherwax ran the catering department and worked in the kitchen, soaking up the details of fine barbecue from Mills. Six years ago, when he and his family moved back to Evansville, he knew he wanted to start his own journey by working for a meat processing facility.

“I got a job at Dewig’s because I wanted to learn where the meat came from and how the processing was done,” he said. 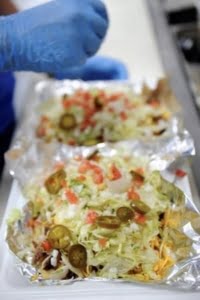 They discussed what a catering program with Dewig’s would look like, and the Dewig family backed him up all the way as he got his business going. That catering business has been going for over five years now, with Weatherwax serving groups of literally thousands from the big red Dewig’s catering rig. The shiny new Pappa Bear’s food trailer for serving individual meals as well as catering is a new addition this year.

“This truck was my five-year plan; now I’ll get another one,” Weatherwax said. 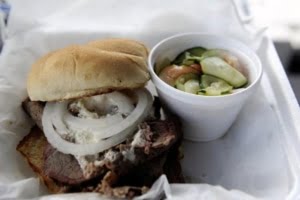 “One thing about Brent, he sure can cook,” Darla (Dewig) Kiesel said. “From pork chops to steaks to burnt ends, his food is fantastic. His catering ability has been a huge asset to Dewig Meats. He can cut filets and turn around and cook a whole hog. Not many caterers have the butchering, cutting and hands-on meat training that Brent has. It’s fun to watch him excel because we always knew he could.”
When you encounter the Pappa Bear’s truck out and about, the menu is changeable, depending on the location and what Weatherwax feels like cooking that day.

Of course he does pulled pork, nachos with pulled pork, and all kinds of barbecued meats, but there’s much more. All the meat products, including hot dogs and German bologna, are processed at Dewig’s — and Weatherwax sets himself apart by using cherry and applewood to smoke pork and chicken, and pecan for beef. The result is light and sweet, quite different from the local favorite hickory smoke. 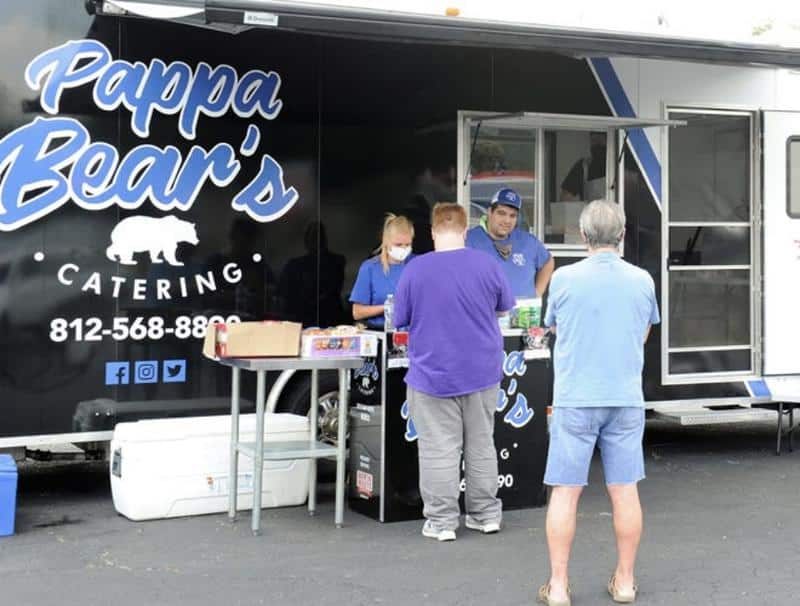 “I keep trying different things,” Weatherwax said. “I like knowing where my meat comes from. The German bologna, they have been doing that for 105 years, so I figured, let’s not change that too much… It’s smoked at Dewig’s when they make it, then I smoke it to heat it and finish it on the flat top for the sandwich.”
Pappa Bear’s Pork Belly Bites are the newest big deal for Weatherwax. He cubes fresh pork belly and tosses it in a special rub before smoking low and slow with a vinegar sauce he calls “Piggy Juice” before finishing with Dewig’s barbecue sauce. When 70 pounds sold out one week, he did 200 pounds the next week, and those sold out too. 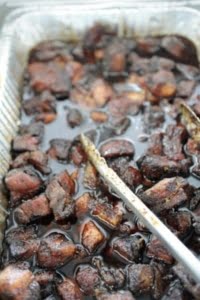 The O’George sandwich is named after Weatherwax’s grandpa, who loved to eat all kinds of interesting food combinations. It is sliced smoked sirloin with homemade horseradish sauce and fresh onion on a Kaiser roll. Every now and then, he’ll throw on some pork steak or burgers, or cure his own corned beef brisket, which he smokes to cook for a corned beef/pastrami hybrid.
Weatherwax makes his sides and desserts from scratch as well, from baked beans and potato salad to his favorite pickled cucumber salad and others. Desserts might include Grandma’s Blueberry Delight, banana bars, bread pudding and cookies.
Soon look for chicken wings and “pig wings,” which are smoked pork shanks.
Find the truck often at Dewig Meats in Haubstadt, at Be Happy Pie Company on Evansville’s West Side, in various neighborhoods and at events.

For large catering, the menu can be as crazy as you want. Go for sliced brisket or a whole hog, steaks, casseroles, chicken and much more with all the sides and trimmings.