(This article originally appeared in the South Gibson Star-Times )

The quest to produce the best meat in the nation is pursued by a core group of people around the country who start with the farm and put time into every stage of the process to create the best tasting meat possible, before entering it into contest.

That means locals can eat the same braunschweiger at their local store as it won every important national award for that type of meat in 2017 – a meat that industry experts agree is the best of its kind this year, said Darla Dewig. There were more than 600 entries into this year’s AAMP competitions, and the judges were meat scientists and specialists who critique aroma, flavor, appearance, color, and texture.

For those who don’t know, braunschweiger is a soft, spiced, spreadable pork sausage that at Dewig’s, has a high bacon content, Dewig said.

At the end of the competition, the producers get feedback sheets from judges aimed to help improve their product and point out what’s working, and the braunschweiger’s form had notes about what a nice texture, or “mouth feel” the local meat had.

“This is the premier competition of the year,” she said of AAMP, “It’s as good as it gets. To win any award is very prestigious but to win first place mean you’re the top of the line.”

The meat business is a community with its own legends and friendly rivalries. When the American Association of Meat Processors decided to make the special category of this year’s competition a country ham, which is a shelf stable pork cured in salt, Dewig’s was excited to give the new category a go.

They don’t sell a country ham, and competition involved intensive research. When word got out they were going to compete, they got a note from Ed Woods, meat legend rumored to be up for a national award for his lifetime contributes to meat processing.

As an idol of the industry, people look at his work as a model, and he lives in Kentucky, where they regularly make country ham. In his note to them, which Dewig called a little bit of light “trash talking,” he told them “Step away from the ham before you do something crazy.”

The seven-month salt curing process is a throwback to the way people used to cure meat before refrigeration. Dewig’s Aaron Kiesel, who himself has a growing industry reputation, was able to master the art enough to win first place in the category. While less experienced meat processors look to Kiesel for advice or might ask about his specific process, he was put in the position of student as he researched the country ham.

Kiesel had to pay attention to a lot of factors, to get beautiful color and taste in the new category; making a country ham involves mimicking the changes in season people historically counted on to keep their meat fresh and safe. The curing starts in temperatures around freezing, mimicking winter for months before slowly warming the meat up to a summer sweat between 80-100 degrees. The meat has to age into a bold flavor, Dewig explained, before being smoked for at least 48 hours at low temperatures. 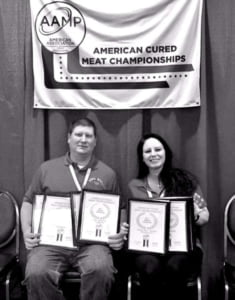 “It’s really back to the roots,” Dewig said.

Winning in the country ham category showed they could take their expertise and apply it to meet new challenges.

But in a world where it’s easy to run out to a department store and buy a link sausage or a pack of hot dogs, Dewig said in the bigger picture, the rivalries among packer/processors are less important than their shared community mission of keeping alive local high-quality meat shops.

People may not realize when they eat a hot dog provided by the Little League, she said, that they are eating an award-winning, fresh hot dog. They may taste it without realizing how unusual that quality is.

When people at a conference come around to ask for help making a better hot dog in their neighborhood, (or better ham, turkey, or any meat), advice is pretty freely given, she said, because it’s in the interest of everyone to keep the traditions alive.

The conferences also host chances to keep up on the latest news and challenges for the industry as a whole – things like pricing, humane handling, venison and deer products.

There’s also a lot of networking.

“We’re trying to distinguish ourselves as quality,” Dewig said. Big box stores are not going to be able to compete on that measure because they’re not going to have benefit of raising the meat locally, she said.

“I can tell you the life history going back four generations of the people who raised that ham,” said Dewig. When a person come in on Thursday for ham, they are buying something that was probably walking around the day before.

“That’s what makes us stand out,” she said. 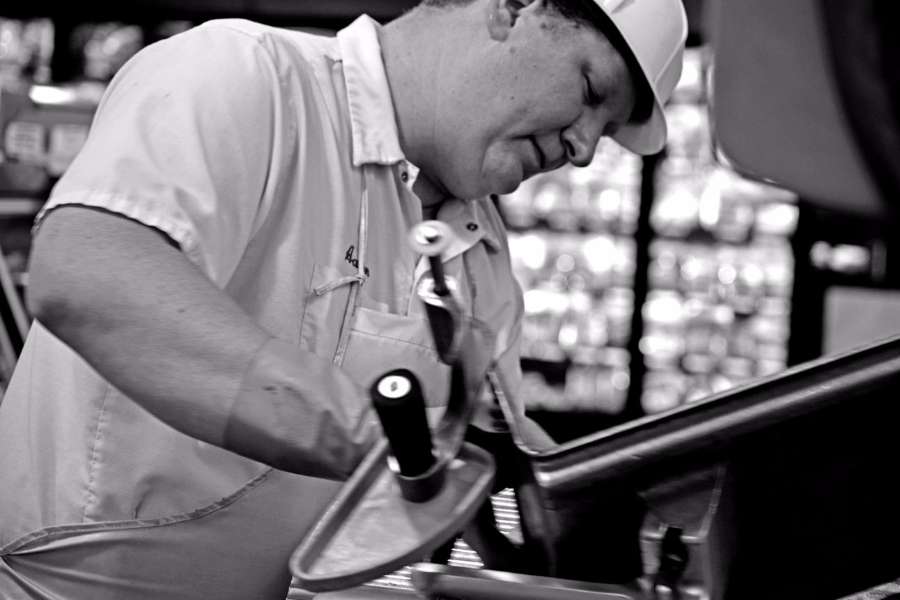 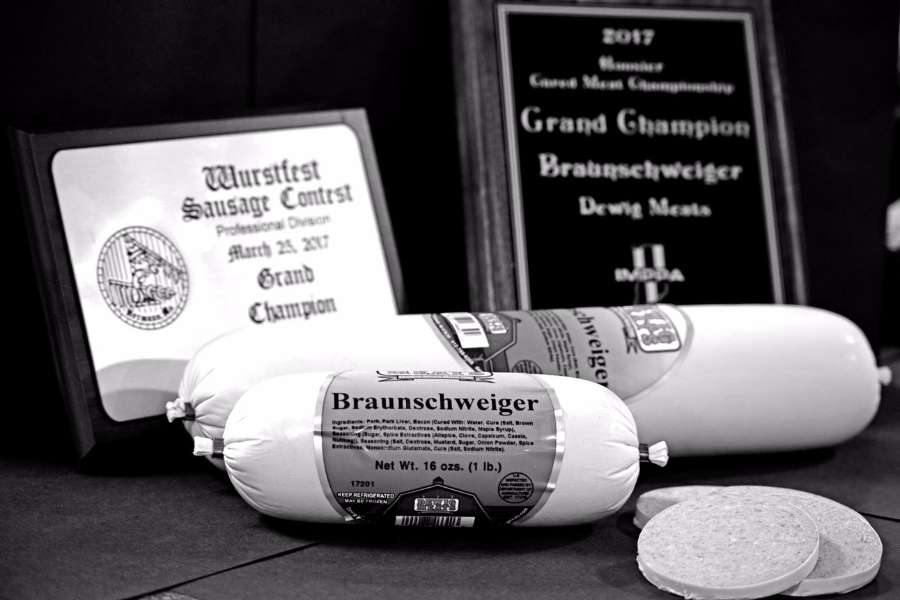 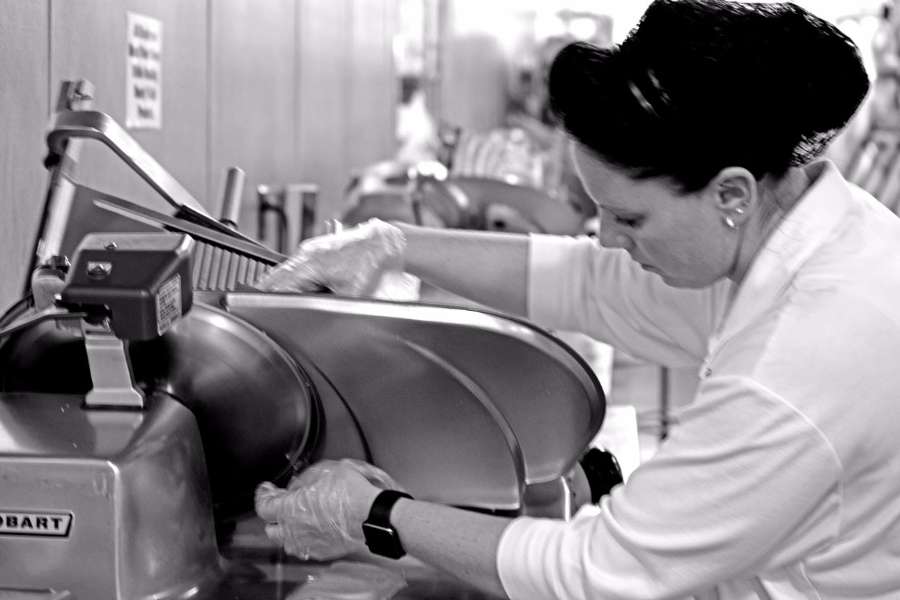 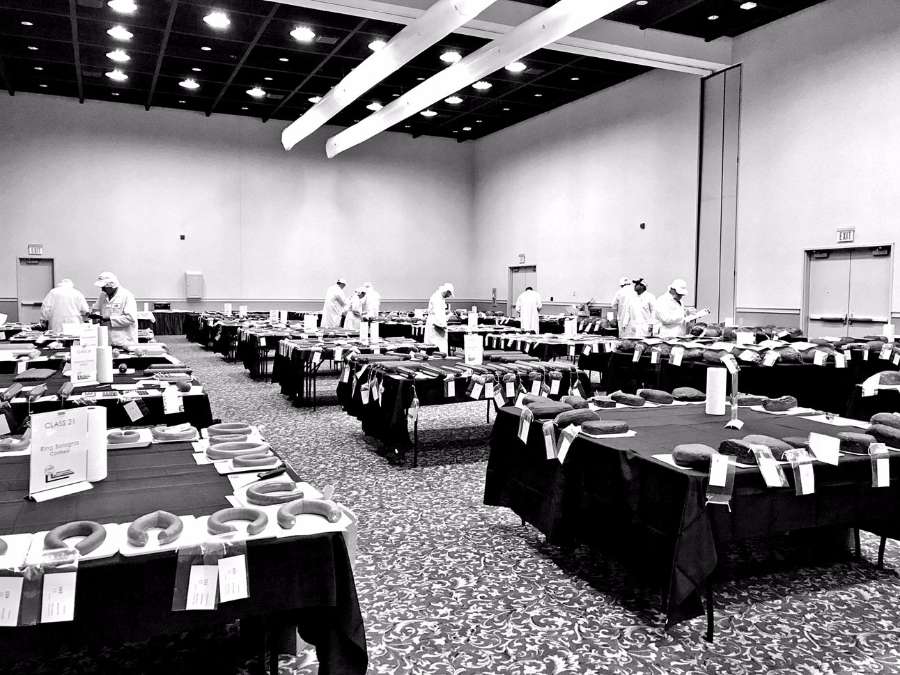 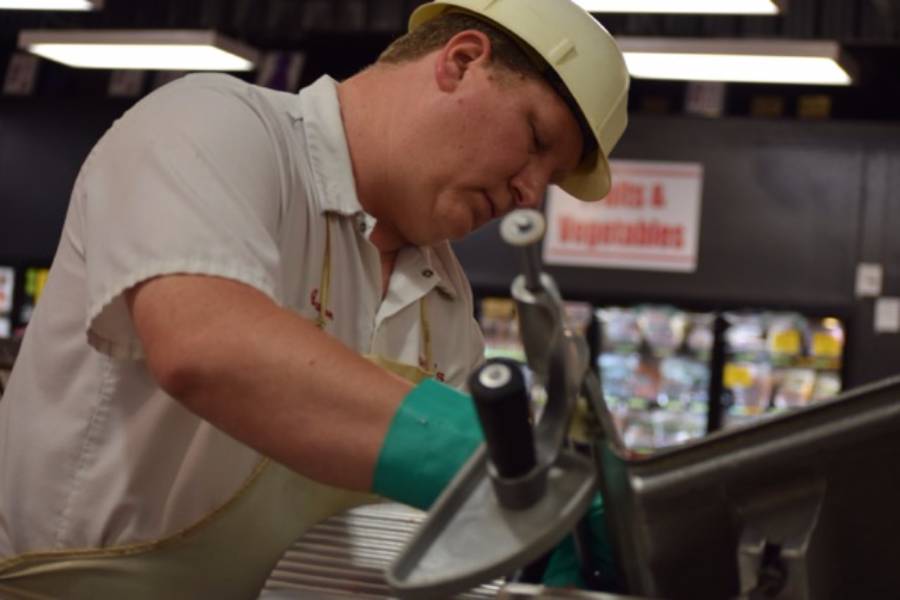 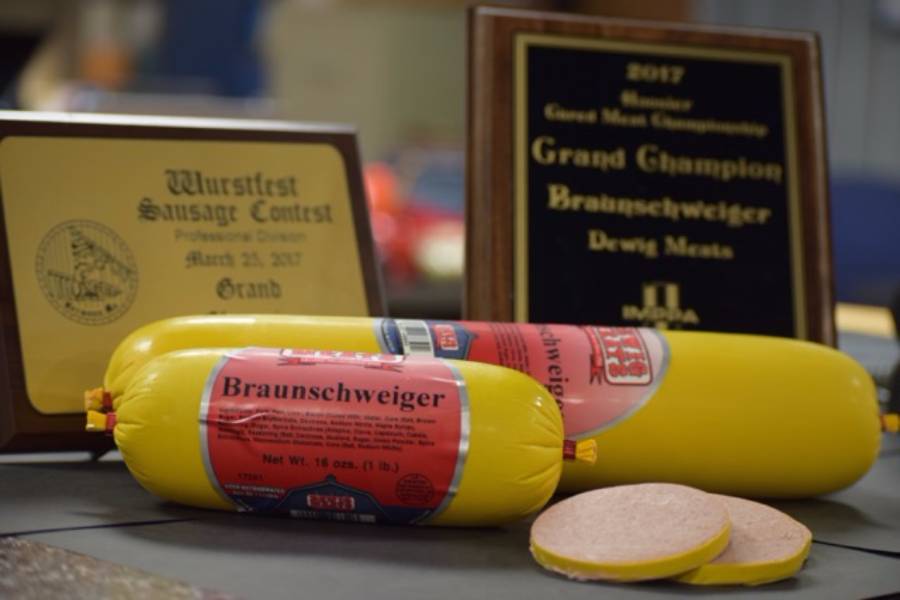 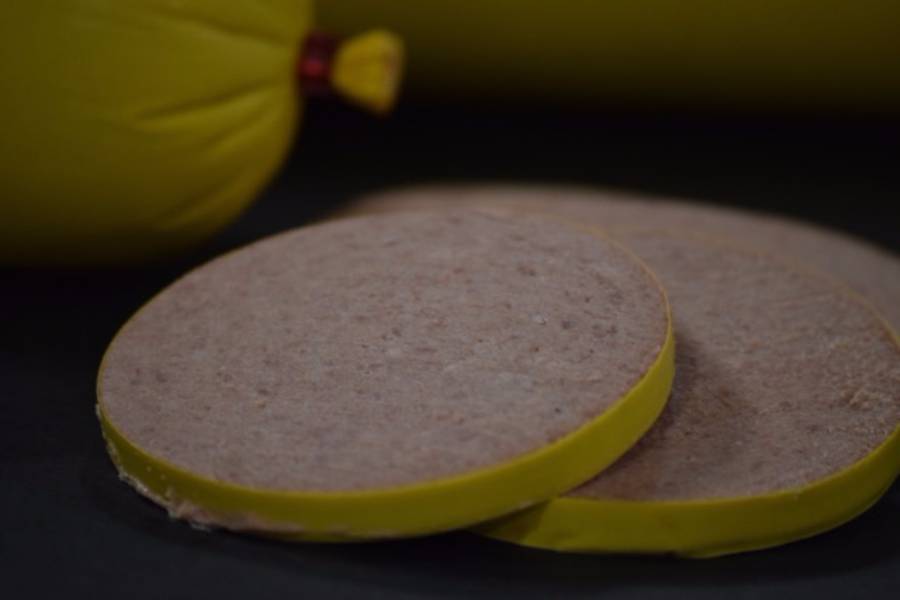 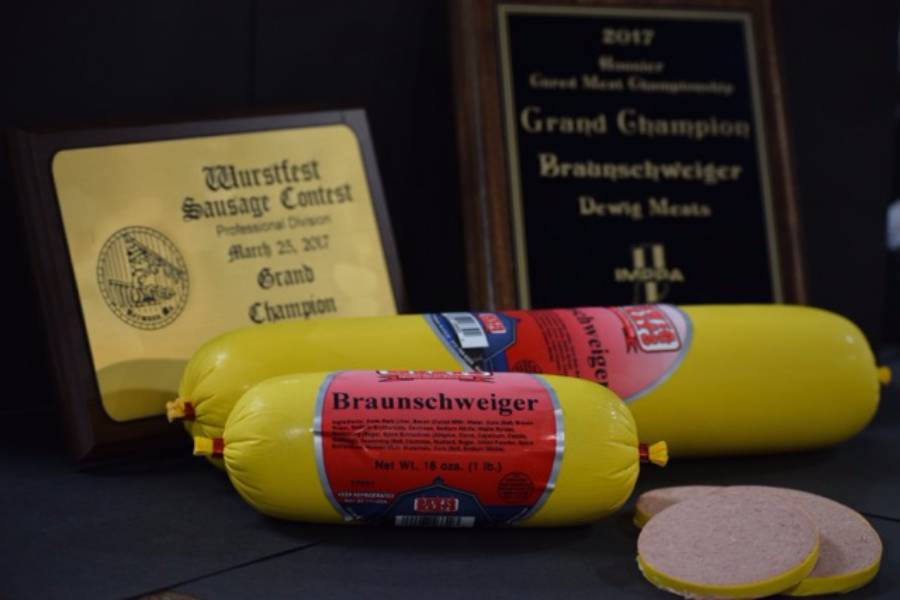 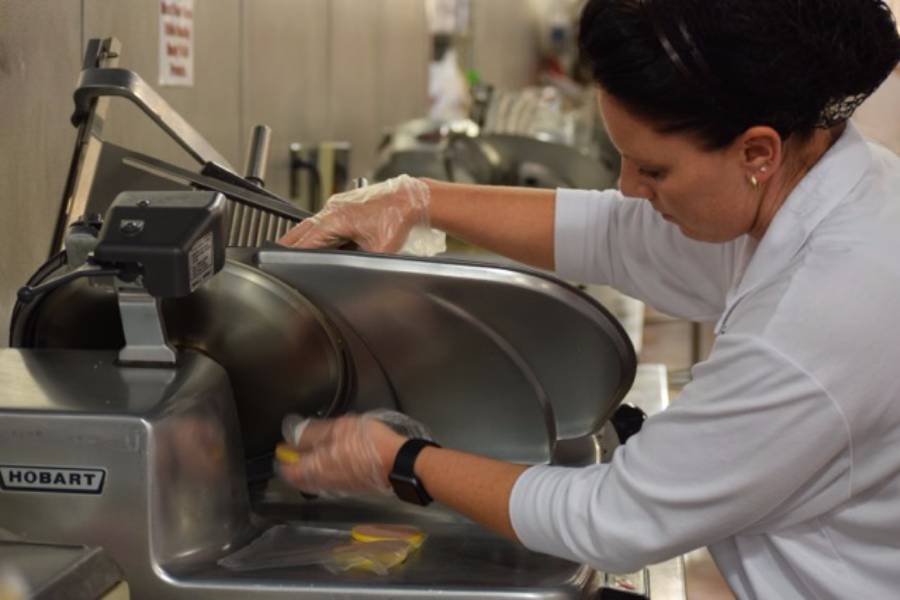 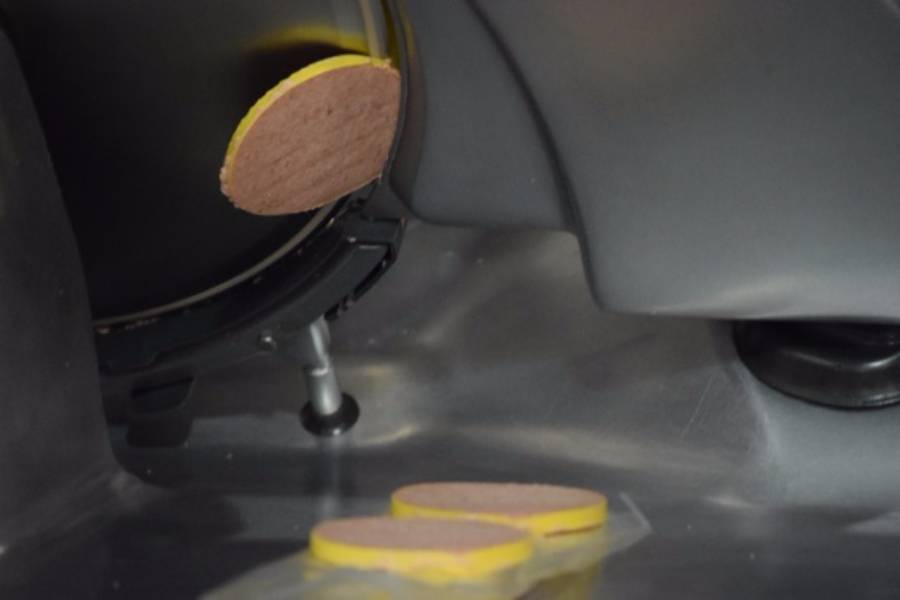