The Tough Get Going.

For some businesses, operating in tough economic times is a harrowing experience. Too often it results in a death knell. But for one small Indiana meat company, tougher times have historically seemed to make them stronger. Founded in 1916, Dewig (pronounced Day-Wig) Meats had no refrigeration and could operate only in the winter. They were located in Haubstadt, Ind., a perpetually small town of about 1,500. The firm had no equipment, only knives. For John Dewig, who founded the business along with his two brothers, Anton and Joe, this wasn’t a hardship. Their father had been a traveling butcher who went from farm to farm to ply his trade. These were the “good-old days.” John’s sons, Tom and Bill, bought the business in 1962 and realized the business was steeled on tough times. It is now known as Dewig Bros. Packing Co. Inc. “They had to go through the Great Depression,” Tom, the surviving brother, explains. “People were waiting in lines outside the store to buy meat. And the family realized its good fortunate that they had a product people wanted.” But for the Dewig family, even tougher times were lying in wait. In 1939, a devastating fire destroyed the firm’s slaughter and processing plant, leaving only one wall standing. The Dewigs rebuilt and were back in business the following year. Another fire in 1967 destroyed the facility, burning through the sausage kitchen and processing room. That forced the plant to be rebuilt again.

Survival of the fittest In the late 1960’s and early 1970’s, Indiana was the home to 38 medium-size packing houses, but by the end of the 70’s, most of them were gone. “Meat-inspection issues took a toll on many, but large-plant competition with huge-volume advantages seemed to do in the rest,” Tom says. Indeed, the new breed of competitors included IBP and Excels, who used pure volume to drive out many smaller operators. Through it all, the Dewig plant hung in there, upgrading slaughter and processing equipment and expanding when they could. Using original German recipes for bratwurst and specialty sausages passed down through the family for generations, they held their ground to await the next hurdle. That challenge came in 1999 when pork producers expanded herds wildly and flooded the market. The producers were losing money on every pig they sold and the wholesale market dropped to about 10 cents per pound live weight, down from the previous level of 63 cents. The Dewig family realized the farmers were losing out and paid wellabove market prices. “These were our friends and our neighbors who had sustained our business since its inception,” Tom recalls. “We had to be there for them and shared in their loss. We were able to do this because we were not just a commodity business, but a complete processing operation that could add value to the finished product. Those farmers have not forgotten us.” In actuality, the company made money and reinvested in itself during that traumatic period, adding slaughter capacity and expanding its workforce to about 50 employees, many of them family members. The Dewig family took the wholesale concept to heart, offering a basic price and discounts for 10-pound increments. They went after volume buyers back when Sam’s Clubs were creeping beyond Arkansas state lines and it paid off. They took on the supermarkets head-on, selling whole pork loins for 99 cents when the supers rang them up for a dollar more per pound. The company began earning a reputation for its high-quality beef and pork and specialty meat items for miles around and many come to shop the 60-foot retail meat case with droves of others. Tom’s wife, Janet, says it is not uncommon for as many as 17 clerks to be working behind that display case. She says people have no problem driving 100 miles to get what they want, have it cut the way they want it and to enjoy the taste of ethnic products they can’t find in other stores. For proximity-challenged customers, the firm sells products on its Web site, www.dewigmeats.com. The firm learned from the days when the market was flooded with pork and began manufacturing barbecue products, which they sold in 2-lb. packages. It has become one of their mainstays. Customers are treated to the smell of brats and barbecue products popping, cracking or simmering on their custom-built catering truck. Many customers get their taste buds in such an uproar that they eat their fill before even walking into the store.

Dean and brother-in-law Matt Gilles started with a semi-truck trailer and turned in an efficient vehicle that boasts four cookers on one truck. So adept at the art of making quality products had the business become that in 2002 Saveur Magazine did a feature on their “Wunder Wurst” products that have become traditional fare in Haubstadt’s annual Bierstrube festival. The publication lauded the coarse texture and natural casings of their bratwurst. And it noted that the Dewigs never ventured into making brats until they had been in business 50 years and found an authentic recipe from Germany. “One of the most unique services we provide to our customers in this age of mass-produced meats is our willingness to meet custom orders,” Janet explains. “This means that instead of limiting your choices to the meat cuts we provide, we will also make any custom cut you desire.” Tom goes one step further, adding that the company’s success has been its willingness to give customers what they want while still being diversified. “When I say the Dewigs have been here since 1916, I’m telling you that we are strong on history and strong in our traditions, but we wouldn’t still be here if we hadn’t stayed up to date.” Although his brother, Bill, passed away in 2003, Tom and Janet along with their children Dean & Darla are all active in the business, Dean now runs the day-to-day operations, while Dean’s wife, Karen, is experienced in printing and advertising, paved the way for her role directing advertising and promotions for the company. This provided Tom and Janet more time to spend with grandchildren. Their daughter, Darla, and her husband, Aaron Kiesel are also active in the business. Darla handles the bookkeeping and Aaron has taken over sausage-making and production. It appears to be a winning combination for the plant’s reputation. In 2008, when Aaron entered his first American Cured Meat Championships sponsored by the American Association of Meat Processors, he brought home four award plaques. But what has immortalized the Dewig family most has been their commitment to the community and industry activities. Tom served as the 60th president of AAMP and Dean is now serving on that organization’s board of directors. They shouldered plenty of the load to keep the Indiana Meat Packers and Processors Association on top of things during the toughest of times. Dean is a past president of the IMPPA and Darla serves on their board of directors. The Dewig family gives others the credit but are never hesitant to do the grunt work as well, putting on programs, sponsoring activities and events. The firm has earned hundreds of ribbons and plaques for their products entered in state and AAMP meat competitions. But perhaps an article in the Wall Street Journal captured their motivation and spirit as well as any. In March, 1999, it offered this insight: 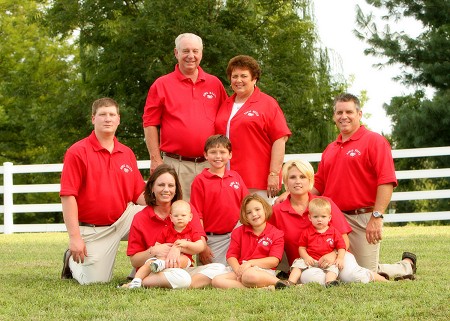 “The Dewigs have made a good living. Their home is a brick estate with a circular driveway, topiary and pig statues. But they don’t take their welcome for granted. Each June they have a customer appreciation day, selling bratwurst for a quarter and giving the proceeds to Wish Upon a Star, a private charity that serves terminally-ill children. They hire extra people just to help park the cars. When the volunteer fire department’s oldest engine, a 1947 Ford, was about to be taken away by a vintage truck collector, Mr. Dewig bought it. He gives school children rides in it.” While the business has grown to the multi-million dollar volume each year, about half of which is wholesale and half retail, the Dewig family still offers custom processing for local farmers, a way of not forgetting its roots and helping sustain area agriculture’s small families. They haven’t forgotten the tough times. They just made the most they could out of them.

(This article was reprinted from the digital edition of MEAT & POULTRY, February 2009)